Currently in its 28th year, the CC75C study is still on-going, an exceptional duration for a population-based cohort now all in advanced old age.

The study started in 1985, surveying a representative sample of men and women aged at least 75-years-old. After a series of intensive assessments with purposely selected sub-groups in the initial study stages, follow-up of the full cohort continued with interviews every few years.

The flowchart below summarises the various stages in the CC75C study to date. From the original of 2610 people, 2166 individuals form the baseline sample (Survey1 Year0)for the longitudinal cohort.  This excluded one of the original general practices (444 individuals) because of differential recruitment and also a sub-group involved in a concurrent intervention study.

Numbers shown below are the total numbers for whom data was collected in each survey.  From Survey 3 onwards these include some interviews with proxy informants as well as with the participants in person, and the CAMDEX assessments include a separate informant interview.  Fuller details of study participation and attrition can be found under Data and Analysis >Data Available. 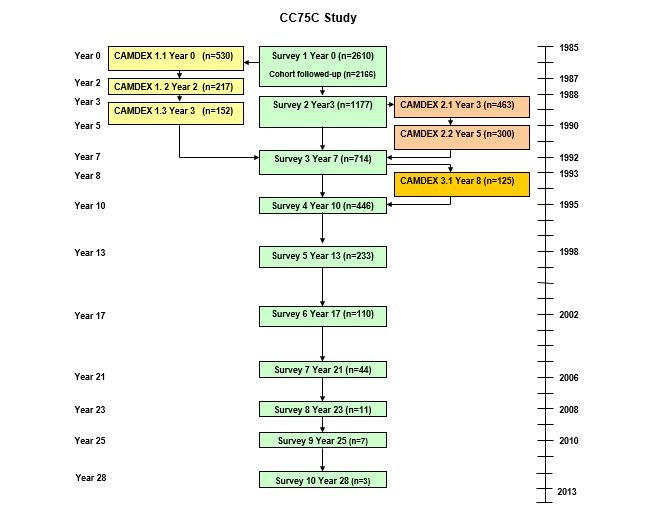